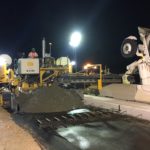 Certified Concrete Construction (CCC) of Raleigh, North Carolina is a great example of persistence paying off.   CCC has been a respected name in concrete construction since 1997 specializing in curb and gutter, sidewalks, walls and slabs using a vibratory screed.  But Operations Manager Johnny Sousa always had bigger things in mind.

“It happened several years ago, we’ve been asked to do slip-form paving from time-to-time, but were always hesitant about jumping into it”  Sousa said, “But I heard about a company that was able to rent the equipment, and while we didn’t get that project, I thought it was genius that HEM would do that as a way for companies to get their feet wet on slip-form paving” 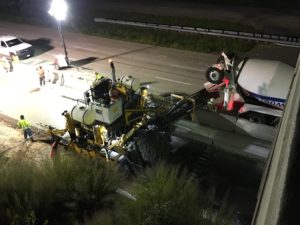 So Sousa kept researching and bidding projects using the rental of HEM equipment for his proposals. “We lost a bid a couple of years ago to a company named Swederski Construction, and I was curious how in the hell these guys were able to do this. So I went to the project and watched and spoke with the owner Len and his son Scott.  I thought Swederski did a fantastic job on the project – the paver they were using?  An HEM slip-form paver.”

Fast forward to the end of 2017 when CCC was able to land a highway project in the Raleigh area, “the company that normally does this type of work really high-balled their proposal, so we were able to bid the project with the entire cost of a slip-form paver built in”  Sousa then made the investment to go to the World of Concrete to research the various slip-form paver manufacturers. “I looked at 8 or 9 different pavers and went by HEM’s booth and who do I run into? Scott Swederski.  So I was able to talk to him about the HEM paver and his projects.” 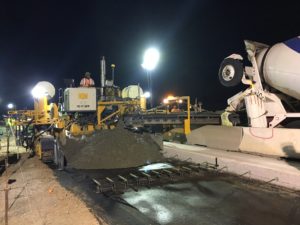 Sousa was also happy with how HEM worked with him in designing his machine “HEM was able to do a front-loading conveyor on the machine, which I needed and which a lot of the other companies were not able to do”

What was it that finally sold Sousa on the HEM slip-form paver?  Simplicity.  “For us, getting into paving, HEM was the best paver for us.  It’s simple, wrench-ready, easy to understand, robust and it does the job.”  Sousa went on to say, “the HEM paver jumps off the lowboy ready to pave, and that’s not the case with other pavers.  And for us, that’s our niche, a versatile, tight quarters paving operation that we are forming and now our name’s out”

Was it worth the wait and all the research?  Sousa says, definitely, “it was HEM several years ago and HEM popped up again in conversation and then HEM at the World of Concrete, it was weird, it was as if the stars aligned and that was the paver we were supposed to get.  And it must be true, because we are extremely happy with the machine and we are going to get paid on this project!”

For more information about HEM products or how to become another satisfied HEM customer, please contact Darren Huinker, VP of Sales at darren@hempaving.com or 319.824.3011.

Want to know more about HEM and our concrete paving products? Subscribe to our newsletter!
Scroll To Top